It’s been the festive season and of course some of Bollywood’s best super productions of the year are released….DON starring SRK has been must see these last two weeks, but I decided to start by seeing the one that had been totally eclipsed by the Bollywood Baadshah’s blockbuster first: Jaan E Mann, Shirish Kunder’s first movie as a director.

For a debut film, he armed himself with a great cast, however this film could be considered er…bizarre. I went to see it on Tuesday and thought I should wait before writing, hoping to shake off the bizarre feeling…but it still persists a few days later.

The film is not supposed to be a love triangle in classical Bollywood terms, but it is still the story of two guys and a girl. The three of them were together in college and get together 10 years later. Salman Khan plays a has-been wannabe actor who is a total megalomaniac whose his self-centeredness has driven away his wife Preity Zinta. Akshay Kumar plays the typical school geek, and still is as he shows up providentially at Salman’s door, when the latter is most in need. The film also stars Anupam Kher who plays an unusual, yet at the same time, typical role you’d expect from him… The film is first set in India and then moves to New York, where Preity is an interior designer.

In comparison to Kabhi Alvida Naa Kehna, earlier this year, where the city provides a sombre backdrop to the serious plot; the city here looks vibrant and colourful: psychedelic signs, the clothes are in various shades of shocking colours, and even the clouds are rainbow-coloured in one scene.

One of the disappointments of this film is Pretiy Zinta’s role as being purely decorative. Seriously, the two men could be competing over a beautiful sports trophy for all the usefulness she has in the film. She is eclipsed by the baby which steals most of the scenes. After being so used to seeing her in compelling roles like Salaam Namaste, Dil Se Veer Zara and recently in KANK where she almost outshines her more “senior” co-stars sometimes, this is feels surprisingly disappointing. 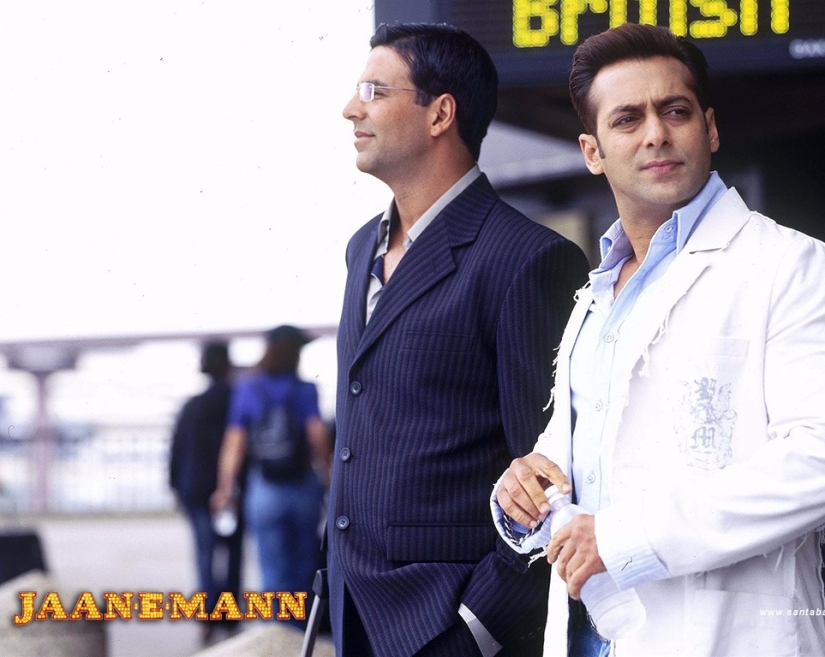 Salman Khan and Akshay Kumar on the other hand deliver an outstanding performance. Salman Khan acts his heart out and he hardly shows his torso – for a change! It was about time the focus of his performance switched from his rippled physique to his actual acting. Akshay Kumar is funny, hot and really moving in the role of the nerd. His character’s laugh is also quite funny and communicative.

The film is technically well directed with beautiful and seamless transitions from the present to flashback scenes, big chorus lines and the first 45 minutes of the movie are like a Broadway musical: harem girls, singing dwarfs and even a qawwali (Sufi devotional music piece) number. The first half feels like a large theatre production, with surreal sets… It’s all very dazzling and spectacular.

However, this may also potentially be the downside of the film. It all feels a bit too over the top and there is just too much. Shirish Kunder looks like he has thrown every visual gimmick he has ever seen. There is also a lack of a common thread in the film structure. The same goes for the songs, which do not have the classical role of voicing feelings or emotions; they are more like musical dialogues that are part of the film script. Few of them are very catchy nor memorable, except for maybe Humko Maloom Hain” which is played throughout the movie and the end.

In short, it’s an entertaining movie, which is ok with some very good gags, however it sometimes went all over the place and therefore it could leave you thinking as you left, “what have I just seen for the last two and half hours?”.  You may even think you could have been better off doing something else with your time.

View all posts by F Miller